By Dr.Francis Mading Deng The National Dialogue in South Sudan turning out to be a nice surprise to those who wanted it but feared that it would not succeed, or a disappointment to those who opposed it or predicted its failure?  When President Salva Kiir Mayardit announced the National Dialogue Initiative on December 14,2016,and then launched it officially on May 22, 2017, there were a variety of responses, whether openly or privately voiced. Some people thought it was a noble and indeed timely initiative, and others pessimistically feared that it would not amount to much.The cynics thought it was another delay tactics or even a distraction from serious efforts to implement the 2015 IGAD-negotiated agreement to resolve the conflict in South Sudan; they also predicted that it was doomed to fail. Probably only a minority felt positively that it was an opportunity to be taken seriously to end the proliferating […]

By Daniel Deng Bol and Leila osman(Juba-South) Sudan is the most oil-dependent country in the world, with oil accounting to 98 percent of the country revenue for almost totality of export,and around 60% of its gross domestic product (GDP). As a new nation, the country has the dual challenge of dealing with the legacy of more than 50 years of conflict and continued instability, along with huge development needs. Under the comprehensive Peace Agreement (CPA) that ended the twenty years long civil war in Sudan stated that the local communities living in vicinity to oil-extraction areas shall benefit from oil industry. It set a 2% share of oil revenue should go to producing states in proportion to their out put while 3% to the local communities. The local communities benefit from oil-revenue given through local government and from development projects offered bythe oil companies operating in the area. The Transitional […]

By Daniel Deng, Deng Simon Garang and Okello James (Juba, South Sudan) Returning back home is a crucial part of Southern Sudan’s new peace, still settling after years of brutal war in Africa’s largest country. But like many others who have tried, Rose Bernard Opiny has had to settle for just being close to home. Opiny fled her house in the Eastern Equatorian town of Magwi in 1983 after Sudan’s north-south war broke out. She returned a year after the 2005 peace deal, but found an army captain living on her plot. She demanded that he leave: he threatened to shoot her. She has since filed a case but county authorities suspended a ruling in her favor because they are too afraid to bring to officer to book. Her last hope is that she may get justice in the state capital of Torit. “I want my plot. I did not […]

By Daniel Deng Bol (Juba- South Sudan)As the rainy season progresses in South Sudan, rapid responses are critical to stemming the cholera outbreak that has affected the country for over a year. Dr. Beldina Gikundi, IOM South Sudan Migration Health Emergency Office said the outbreak has compounded already dire humanitarian needs. Approximately four million people have been displaced by the conflict that erupted in December 2013. “In a country with mass displacement and severe levels of food insecurity, the effect of the continued cholera outbreak on the health of vulnerable populations is acute,” explained Dr. Gikundi. “As we saw the outbreak continue even during the dry season in 2017, we expect to see the trend persist throughout the rainy season, which leaves as much as 60 per cent of the country inaccessible by road. Sustained and flexible responses are crucial to stemming the continued transmission of the disease in this […] 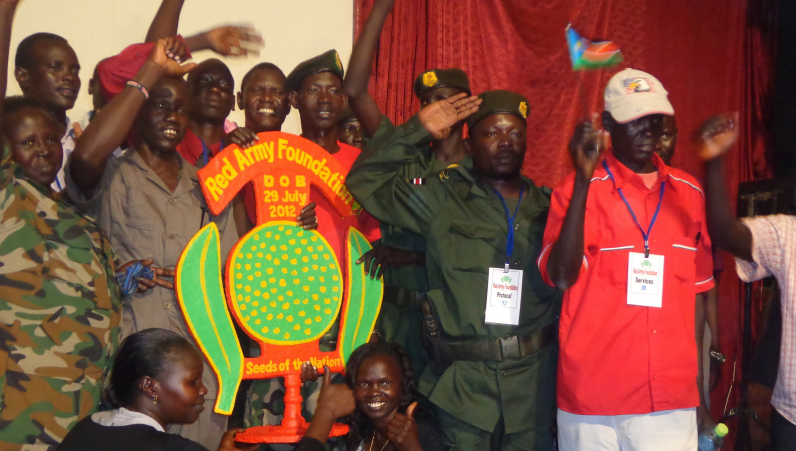 By Daniel Deng Bol (Juba, South Sudan) Members of South Sudan’s Red Army Foundation have commemorated the Martyrs Day on 30th July 2017, a day dedicated and held annually in memory of the fallen country heroes and heroines during the years of liberation struggle. The Martyrs Day is also annually marked to celebrate the death of the founding father of the nation, Dr. John Garang de Mabior, who died in a helicopter crash on his way from Uganda on 30th July 2005. In statement to the reporters in Juba, the National Chairman for Red Army Foundation, Mr. Deng Bol Aruai said it was rather unfortunate to celebrate the Martyrs Day this year when innocent people are still dying in South Sudan and wasting their lives in what he described as a “futile rebellion”, coupled with ethnic violence. “As we commemorate this occasion, it’s rather unfortunate to note that our people […]