By Atem John
In the first ever exhibition, the government of South Sudan in conjunction with United Nations Development Fund (UNDF), including members of the country’s private sectors on Tuesday opened a four-day exhibition aimed at showcasing its production skills and home-made or manufactured products. 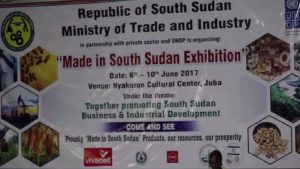 The exhibition aims at  unveiling opportunities available in the country for both domestic and foreign businesses in order to salvage a plummeting economy and encourage growth.

About 200 business companies, among them local manufacturers, showcase varieties of locally made products which include bottled water, alcohol, juice, honey and food snacks, shea butter and cosmetics, iron sheets, detergents and liquid soaps, mattresses, and furniture.

The event was attended by business community, senior government officials, members of the diplomatic corps and UN agencies.

Speaking at the event, trade minister Dr. Moses Hassen said most of the country’s resources  such as gold, timber, skin, hide, gum Africa, coffee and fish are being illegally smuggled out of the country and sent to the region and the international markets.

“Places like Kapoeta,  Kajo-Keji (Central Equatoria) here have gold and this is a precious mineral which we have to benefit from,”  Hassen said. “But we cannot effectively benefit from these resources if we do not add extra value to them. How do we add extra value to these resources? I know in some other countries, for example, our neighboring Ethiopia here hide are not allowed to be exported out of the country if they are not turned into leather”.

“This is a simple measure we can do here because we have a lot of skin hide, our animal hides are being taken out of the country unprocessed,”  the official continued.

He commended local manufacturing as a means to reduced dependence.

Innocent Tukwasibwa, who spoke on behalf of local manufacturers, while emphasizing peace as a prerequisite for continued production in the country encouraged South Sudanese consumers to buy locally-made products.

South Sudan is a landlocked country and is bordered by the Republic of Sudan to the north, Ethiopia to the east, Kenya to the southeast, Uganda to the south, the Democratic Republic of the Congo to the southwest and the Central African Republic to the west. The economy  is one of the world’s most underdeveloped with little infrastructure and the highest maternal mortality rate and female illiteracy rates.

Atem John is a practicing journalist and he can be reached at atemjohn96@gmail.com.