African is an important focus for scholars because of its diverse cultures. The distinction between men and women, as far as their role was concerned, was clear, and yet any conflicts that arose were well managed within the African framework. But with the advent of westernization which has become synonymous with civilization, there is unease in trying to accommodate the inconveniences of hybrid cultures. 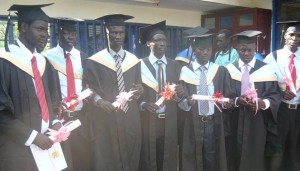 University of Juba students during a graduation ceremony.

Among some societies in South Sudan, take the case of Acholi, for instance, a garden cultivated by thirty to forty young men through African communal cultivation is later left to a single woman to weed until harvest time. For the Murle of Jonglei State and Toposa of Eastern Equatoria (present-day Lomurnyang State), construction of grass-thatched houses is solely left to women, while men busy themselves defending the community and engaging other communities.

Among the Dinka (Jieng) people, women are placed under the shadow of influence and granted little freedom by delegation of such restricted responsibilities as deemed necessary by men. Marriage as the social responsibility that binds families is featured by conditions that dictate and sometime never favor certain groups or classes of people. Short girls were/are not easily awarded with ceremonial marriage, especially among the Bor Dinka, except when one hails from a noble family background. Even men are not granted the freedom of choice they desire when it comes to marriage. All young men and sons of the chiefs marry under the directive of parents.

What happen when one insists on a marriage proposal against their parents’ and the relationship eventually fails because of misunderstanding among the couple? The lady may compose apologetic song, clearly detesting the husband and his family, as seen in: “Ku, wurdie, jol ngem ne ngodu ku yin cie Mac de Yuot?” (Literarily meaning “My father, how did you know that, and you are not Mac Yuot?” Mac Yuot was a legendary soothsayer among the Bor. Sometimes a girl would dissuade her parents on turning down a suitor’s proposal through songs. Whatever the intention was, the role of communication through songs was central among women in African tradition and the relevance continues to date.

Background
Today families are characterized by too much breakdown, violence, children moving out from home to the street life to seek survival at tender age and distortion of cultural values. The unbearable problems women and young girls under marriageable age face in society are obvious. This untold issues women and young ladies suffered among communities in Jonglei while in silence need attention. The problems range from forced marriage, wrong choice of spouse by girls which later leads to disagreement and finally divorce and lack of trust between married couples. The soul of African society, the harmony that once existed, has eroded away unnoticed. As such, there seem to be protests from women which they attempt to communicate through songs. But what exactly are they trying to say?

Problem Statement
The premise of this paper is to find out the effects of communication through songs. Are there really there any positive outcomes (society issues) addressed as a result of songs communication? When women compose mockery, complaint and praise song, are they happy or are they simply reacting to unfavourable circumstances?

The objectives of the study are to know why women communicated through songs, to know the effects of their communication through songs on the community, and to know if their problems are solved.

Justification of the study of this research work is to investigate the rationale behind the songs compose by women in Jonglei state. Thus it will educate the stake holders and publics to be aware of what is happening among the communities.
Download a copy and have a good read.

13 thoughts on “Effects of Women’s Communication through Songs on Communities: A Case for Jonglei State”