(Juba, South Sudan) Members of South Sudan’s Red Army Foundation have commemorated the Martyrs Day on 30th July 2017, a day dedicated and held annually in memory of the fallen country heroes and heroines during the years of liberation struggle. 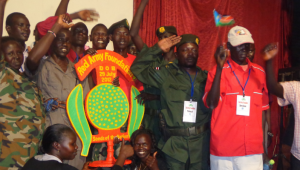 Members of the Red Army pose for a group photo. File Photo (by Daniel Deng. 2013)

The Martyrs Day is also annually marked to celebrate the death of the founding father of the nation, Dr. John Garang de Mabior, who died in a helicopter crash on his way from Uganda on 30th July 2005.

In statement to the reporters in Juba, the National Chairman for Red Army Foundation, Mr. Deng Bol Aruai said it was rather unfortunate to celebrate the Martyrs Day this year when innocent people are still dying in South Sudan and wasting their lives in what he described as a “futile rebellion”, coupled with ethnic violence.

“As we commemorate this occasion, it’s rather unfortunate to note that our people are still dying innocently and wasting their lives in futile rebellion and ethnic violence, instead of focusing and directing our efforts toward achieving the dividends of the SPLM/A Liberation struggle for freedom, by consolidating peace-building efforts and working for development and prosperity for the wellbeing of all, remembering that our common enemy is not each other but tribalism, hatred, division, sectarianism, hunger, starvation, disease, illiteracy, underdevelopment, inflation and all the socio-economic challenges facing us today, which requires us to unite in the spirit of patriotism and fight against them together; otherwise if we continue disunited, we shall never succeed to defeat these common enemies”, Aruai stated.

He emphasized that there was no need for more death and destruction in South Sudan because many lives had been lost, a lot of blood  and the ultimate price was already paid for by the martyrs for the freedom during the liberation struggle.

While marking the day, the Red Army members  said they equally remember the war windows, orphans and the wounded heroes who became victims of the liberation struggle for the cause of freedom, and also equally remember the internally displaced persons, refugees, women and innocent children who have greatly suffered the consequences of war.

“We take this opportunity of this occasion to say that enough is enough to the suffering of people of South Sudan. Time for death and destruction is over. It’s time for us to work together for development, it’s time to build the nation and move our country forward,” Aruai further added.

In the early 1980s, the Sudan People’s Liberation Army (SPLA) recruited and began training boys as young as 12 to fight in its battle for independence from Sudan. These children were later given a name Red Army by the SPLM Chairman Dr. John Garang. According to a 1994 Human Rights Watch report, some of the Red Army members fought along side the SPLA.

In a landmark transition from warfare to welfare, Red Army members established a Red Army Foundation on 29th July 2012 as a national patriotic organization that brings together the historical Red Army of South Sudan, who, as young people, effectively contributed to the success of the SPLM/A Liberation struggle for freedom. The aim is also to preserve the patriotic legacy and ideals of the ruling party, SPLM, and also at addressing social problems in South Sudan.

Red Army members annually celebrate its establishment day on every 29th of July as they have recently marked its 5th anniversary in Juba.